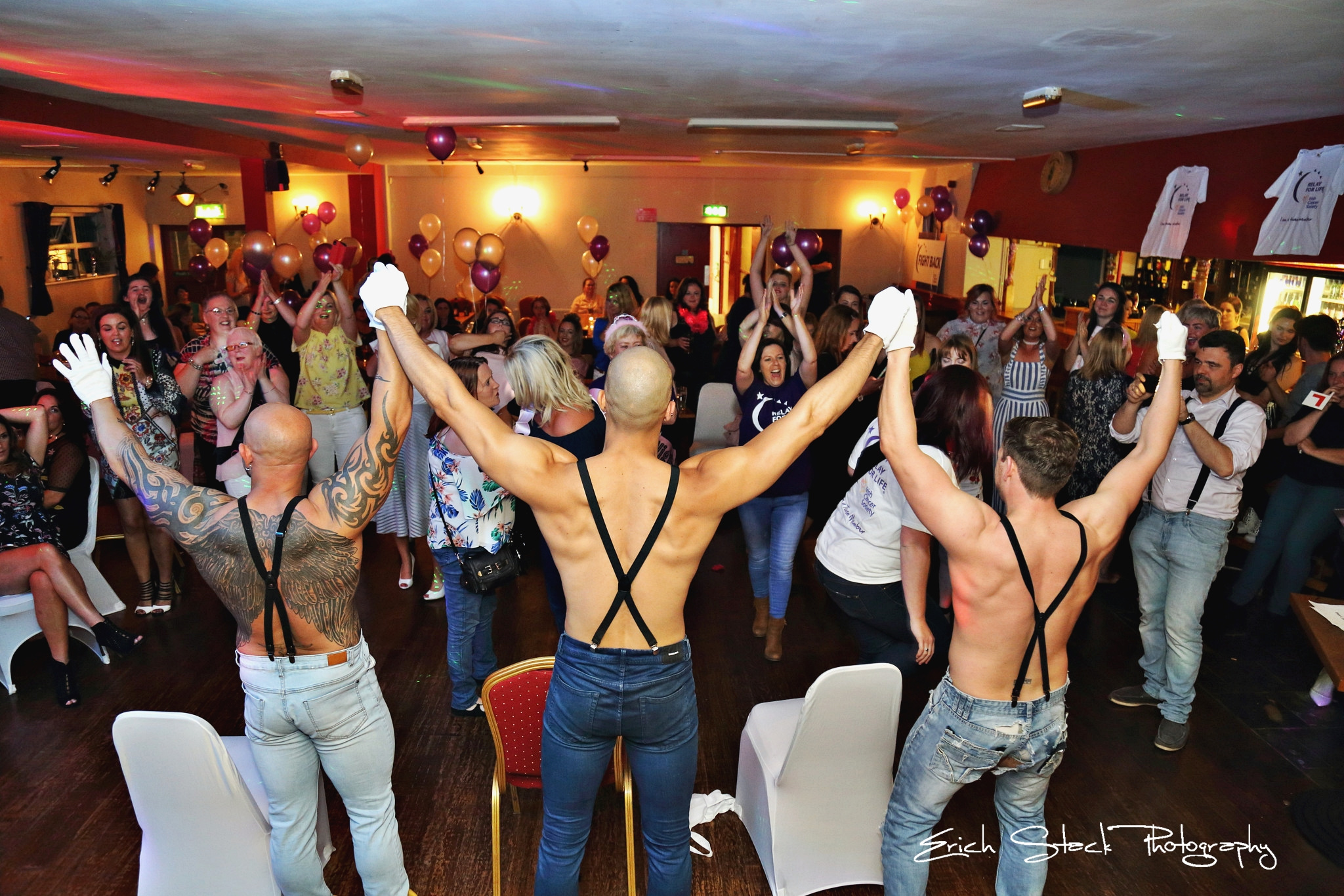 Male Strippers on Tour : The Hunks of Desire Show

Stripping against cancer in the Rebel County

The speed limit was broken moderately by the confident Male Stripper I was assigned as a driver and chaperone. His friend, a shy Finnish Army captain kept silent throughout the journey from Dublin to the outskirts of Midleton; where the Hunks of Desire would perform for a ladies only Irish Cancer Society Fundraiser. I took in the rare views of the clear Irish blue skies and started being my usual chatty self.

Dan Paul, the manager of the Hunks of Desire asked me if I can do a PR stint for the Hunks of Desire Show. As a freelancer I never say no to work. But I have never done a Male Stripper show. I had my reservations, being male and all .  “It’s for  charity” he said. “You will be grand”.

I was picked up by a young dancer named Steven who introduced me to his friend. “ We met in Lebanon he explained”. He went on to give me a first hand insight of his experience with the Irish UN troops and how the Irish, the Finns and the Estonians lived and worked under a hot sun and a hotter political situation. “ I don’t see the Army duties and stripping as contradictory” he answers my somewhat dubious questions about his double life. “I deliver my duties to the Irish Army without fail” …. “ and your duties to the Irish female population with military precision” I hit back. Laughter fills the Audi A5 as we approach the Two Mile Inn.

Hunks of Desire : Bohemians with a Full Monty

The Hunks of Desire have battled it out throughout the recession. Delivering Stripograms since 2002 they have seen the land of plenty during the Celtic Tiger and the times where they spent more time in the gym and doing overtime in their day jobs,rather  than stripping  under the spotlights of halls filled with female admirers. But the tide is turning. After the Marriage Equality referendum, the sensual arts, frowned upon not so long ago, are experiencing a revival. A trip down Temple Bar on a Saturday night is a stark reminder of the hedonistic  Bohemian Era , a phenomenon on which I had a keen interest as a teenage bookworm. Live and let live is the prevalent Irish attitude, but I was still  wondering how would this Full Monty affair would go down in the quiet Irish countryside.

We arrive first and I pull out my to-do-list. “We are fashionably late” non-apologises another confident member of the troupe accompanied by his wife. “This is Pat” Steven introduces me to his fellow performers “ and AJ” a tall Argentinian man with a baby face and not so baby like triceps.

“Irish time 10pm” Pat smiles and winks at me.

I meet the organisers to collect the paperwork. I can’t help noticing an open hearts and open  arms Irish hospitality. Julie Sice  and Deirdre O’Sullivan get me to the makeshift changing room, an actual restaurant that has all the mods and cons included. “They can’t see the guys before the show” Dan’s words ring in my ear. So I smuggle the Hunks inside while the ladies tell me of why they are running the Relay for Life in Midleton. They are themselves cancer survivors and  they went through the ordeals of stage three cancer. “We want to raise as much money as possible for this”, Julie goes straight to the point. “There isn’t enough support for cancer patients. We depend on NGOs for support and we need the funds to keep it going”

“We are bounce back bunnies” Julie is a very chatty and bubbly lady with a distinct Cork accent and a broad smile. “ and that’s the name of our team in the Relay for Life”. 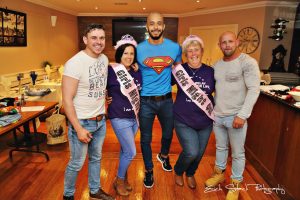 The Relay for Life is a 24h community event which can be found trending under #CelebrateRememberFightback. It raises vital funds for cancer research and patient support for the Irish Cancer Society. The majority of these events would normally go for the usual fundraising suspects; bingo nights, dancing competitions, a night at the races. The ladies of Midleton decided to raise the bar and get onboard a well known male stripper troupe. “We got the Hunks of Desire as they are already known in Cork. They did a show in the Bodega in January and the place was filled to the brim” adds Kate O’Connor the third organiser.

Last minute rehearsal : The Hunks of Desire are almost ready

Back in the changing room Pat and Steven were rehearsing their Jail Break routine. Orange jail suits on, with the word “ GUILTY” emblazoned on their backs they wait for AJ to finish his “teaser”. That’s what they call a 5 min intro with a male stripper moderately undressing and then doing a runner for the changing room/ restaurant door. The cheering is reassuring. AJ waives his finger at them, as the ladies ask for more.

The crowd is mixed, with most ladies donning the Rebel County confidence in their dress code and demeanor. Fresh faced early twenties and golden aged cheeky smiles share common tables. This is a family affair. Roughly 150 ladies fill the room. The bar has a stage that has seen better days and the DJ has set up disco light that give a feel of the 80s in the hall.  I speak briefly to Trish, who presents herself as a grandmother with a teenage mind and soul. She seemed to know how to “set fire to the rain”.

The Stage is on Fire : The Hunks of Desire Show is live

The three dancers take turns to perform their solo routines. Naughty soldier, hot builder (hard hat and tool belt included)  and the all time classic, Magic Mike. The pattern is similar. They use the stage to gather momentum. Then dive into the crowd. They dance on stage then mingle with the ladies causing a stir every time they approach a table. Impromptu lap dances are free for the taking. No cringe paraphernalia at sight. No tip collecting g-strings.

The guys explain to me later that the whole g-string and baby oil maneuver is not for the Irish crowd. “Here girls want to see you dance. They are better behaved outside Dublin, actually this crowd is one of the best behaved.” Pat does a whipped cream trick with an Irish flag wrapped around his waist. The girl for whom he is performing pulls back. “ I can’t” she says “I am sorry…and no it’s not that…I am vegan, I can’t have dairy”.  More laughter and roaring ensues.

Magic Mike made in Co Cork

AJ does a lapdance for a lady sitting at the bar. She throws her hands in the air. Her friends take photos. They invite ladies to the hot seat. A chair, is positioned centrally on the stage. Some are shy but more than a good few jump on the stage dancing. There is skill in dancing so close and avoiding full body contact. Millions and zillions of pushups methinks. 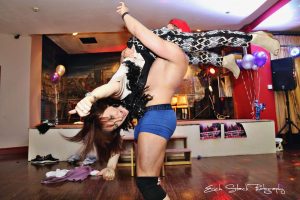 Steven re-enacts skilfully Channing Tatum’s solo. “ uuuuuhhh …My Pony” echoes the room. I do recognise a few moves that are direct derivatives of army drills though. The ladies don’t mind “Steeeeeeve” shouts Kate. Then another hot seat and one of the girls ends up on Magic Mike’s shoulders.  The noise is deafening.

They jump on three chairs wrapped with US flags and go for the Full Monty. Having done prior research I know that it is going to be a quick flash. But the screaming intensifies. The crowd is definitely looking for more. So the guys play with their flags like matadors in a corrida for a few more seconds. More admiration.

The winners of the raffle get a surprise lap dance from the Hunks of Desire, now only  in jeans and black braces. There is more laughter than in a sold out comedy club. One of ladies decides to give a lap dance to one of the Hunks and jumps on his lap. Pat smiles and enjoys the show.

While the Hunks of Desire socialise and pose for photos, I manage to speak to a group of girls of the younger generation. The conversation turns again to the fight against cancer. There is a contradiction between the cheerful mood filling the room and the subject matter of the conversations. I can only admire the stamina of these women. They make the best of what life has in store for them. Last night they were in the cancer ward taking care of their loved ones, tonight they are taking selfies with well built male strippers.

The Hunks take their time. “I will stay on and play some games with the crowd”. Steve has a few tricks up his sleeve. One of ladies, blindfolded, searches for a spot prize stuck to his braces with her lips doing a pat-down search, that would satisfy the high standards of a US Airport security personnel.

There is nothing macho about this show. While I am sipping on a pint of Guinness, courtesy of Julie; AJ who has been quiet for most of the night tells me that he wants to run in the Relay for Life.

“Great stuff!” Deirdre asks me about their t-shirt sizes.

Say goodbye to the Rebel County

I ask Pat and his wife: “Where did you guys meet?”

“12 years and three little girls later we are still together.” They bounce off each other with one-liners that make the whole crew smile.

On the motorway I have the feeling that I have forgotten something. Feck! The performance contract!  I ask my driver to turn around. More warm embraces and kindness. Nothing like a second goodbye from the ladies of Midleton.

( The Hunks of Desire, aka Ireland’s Hottest Beef, are a Male Stripper Troupe that performs nationwide. Keep an eye on their website for the next mantastic gig.)

The Relay for Life Midleton is a 24h walking relay and  will take place on the grounds of the CBS Secondary School, Midleton on the 26th of August @ 15:00.)

Emmanuel Voglis is a writer, performance poet, and pen for hire.

What you can read next 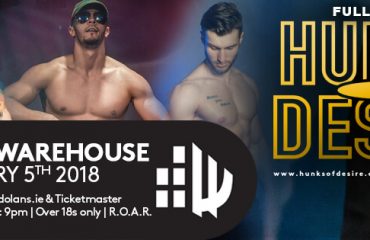 Women’s Little Christmas : The Hunks of Desire Show in Limerick 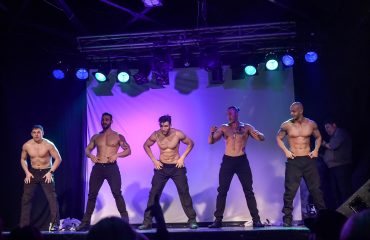 Why become a Male Stripper … The Hunks are frank 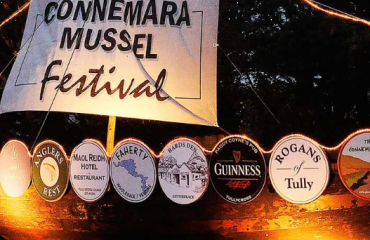 Bank Holiday in May for Hen Dos Birthday Parties in Ireland

Copyright © 2017 The Hunks of Desire Show www.hunksofdesire.com . All rights reserved.